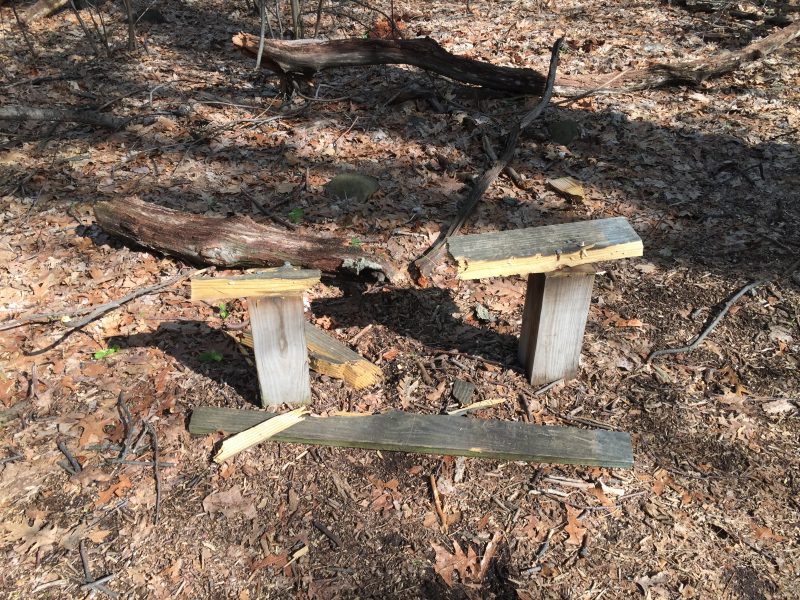 The little bench was nearly as old as the Greenbelt path it sat beside. To most who came to visit, the bench had always been there, almost like the forest. And though it was small and rather homely, the bench came to have many friends.

Serious hikers would briskly stride the trail, perhaps on their way to Moses Mountain or Historic Richmond Town or the Carousel for All Children in Willowbrook Park. Joggers would come rushing past. Neither usually gave the bench more than a passing glance.

The bench was there for those whose pace was no longer swift or tireless, but whose love of the forest was undiminished by the years. To them the bench was beautiful. It had been placed there as part of a Boy Scout project, a thoughtful act of social responsibility, of paying forward in appreciation for the woods having been saved and the trail being there in the first place.

The bench attracted families. Parents introducing their children to the wonders and wisdom of the woodlands would pull up and look around. The kids would clamber on the simple board seat and maybe have a snack before venturing on.

Older folks, too, found rest on the bench. Some were regulars visitors. This trail was gentle, but the opportunity to pause and refresh was always welcome.

One could happily sit on the bench without having to know the amazing Revolutionary War history of the surrounding landscape, or the dashed dreams it holds, or the tales of the supernatural, or that the place had very nearly been devoured by a highway.

If you sat quietly for a while, the woodland creatures would come out of hiding. You might even see a deer wander past.

Apparently not everyone loved the bench. One day this friendly amenity was greeted not with welcome but with violence. For reasons inexplicable the seat was bludgeoned to pieces, its fastening bolts left exposed, protruding from its legs. The bench was defenseless. It had given comfort to untold many and had harmed no one. The reasons and motives for vandalism are usually as obscure as the antisocial intentions.

Should it be repaired? Replaced? Removed? The broken bench now serves no one. Its remains are garishly swathed in yellow-and-black plastic “caution” tape while its fate is decided.

It was a simple bench, and would be easy enough to repair. A scrap of lumber and a wrench would do the trick. But despite its place in Staten Island’s great outdoors, the bench belonged to modern society, a place that must operate on rules and procedures, and a division of responsibilities. A place that must deal with the broken people and bits society produces, compensating for the acts of a few, oftentimes at the expense of the many. A place where simple things are not always simple at all.

Michael W. Dominowski has been an avid hiker since his Scouting days. He is a member of the Greenbelt Conservancy Board of Directors.