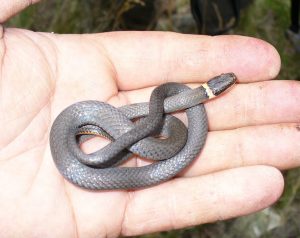 One of the more diminutive snakes found on Staten Island is the northern ring neck snake (Diadophis punctatus edwardsi)).  Barely as wide as a pencil this species only grows to a length of 15 inches at best and most measure a foot or less.  Although they are small and rarely seen the ring neck snake is an attractive and interesting part of the island’s forest ecosystems.

The genus name Diadophis is derived from the Greek words diadem meaning “headband” and ophis meaning snake. Indeed, the body of the ring neck is a velvety bluish-black to slate gray in color with a yellow collar around the neck. The species name punctatus comes from the Latin word for “spot.”  This refers to the row of black spots that run down the center of the otherwise yellow belly.

These secretive snakes prefer forest environments where they live in the leaf litter and topsoil.  I’ve never encountered a ring-neck in the open, rather they must be sought found under rocks, logs, discarded lumber or other debris.  They prefer somewhat moister shelters and may be found in decaying logs as well.

While they are harmless to human, the ring neck snake is a terror to the salamanders, earthworms and insects that comprise the major part of their diet.  On our island the red-back salamander (Plethodon cinereus) is an important source of nutrition. While constriction is employed to subdue salamanders, ring necks also produce a secretion in their saliva that helps subdue their prey.  This secretion is produced in the Duvernoy’s gland in the upper lip with ducts that release its products into rear of the jaw.  The evolutionary relationship between Duvernoy’s gland and the venom gland of truly venomous snakes is debated with conflicting evidence and interpretations on both sides.

Depending on the size of the female the ring neck snake produces two to seven eggs which are laid in or under decaying logs.  Natural predators include larger snakes, great horned owls, hawks and bullfrogs.  Unfortunately feral cats are likely the major threat to our local population.