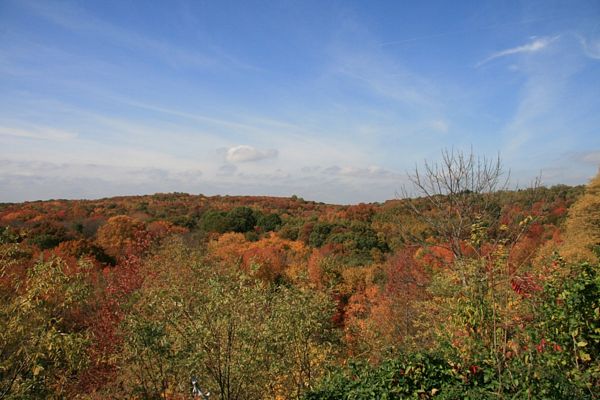 The rich colors of autumn paint the wooded hills of Staten Island in this view from atop Moses Mountain in the Greenbelt,.

In the early 1960s Robert Moses, the notorious New York City planner and Parks Commissioner attempted to construct the Richmond Parkway over Todt Hill cutting through what is today’s Greenbelt.

Earth and rock blasted away for the highway was hauled to a remote area eventually forming a 260-foot-high rubble mound destined to become a highway interchange. It earned the ironic nickname “Moses Mountain.”

The name stuck but the Parkway did not.  Intrepid citizen-activists vigorously protested the highway and won their battle. Today, a steep hike up a much greener Moses’ Mountain rewards visitors with a panoramic view of the Greenbelt and New Jersey’s Atlantic Highlands, 15-miles in the distance.