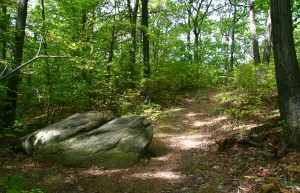 Often referred to as one of the most tranquil places in New York City, High Rock Park is noted for its quiet ponds and deep woods. Hosting the Greenbelt Conservancy’s headquarters, the park has been recognized as a Natural Environmental Education Landmark.

Over the past two centuries, prominent Staten Island families including the Vanderbilts, Flaggs, Conners, Ebbets, and Tonkings have occupied parts of this land. In the 1930s, the Boy Scouts Council owned the land, receiving thousands of campers every year. In 1951, the Boy Scouts sold the property to the Girl Scouts Council of Greater New York. Gretta Moulton (1912-1971), an energetic camping consultant from Massachusetts, helped with the Girl Scout Camp’s program. Recognizing the magnificent beauty of this place, she worked to preserve it from the growing pressures of urban development.

In 1964 during a real estate boom on the island, the Council sold the property to a private developer. Fortunately, through the efforts of Moulton, along with Borough President Albert V. Maniscalco (1908-1998), Robert Moses (1888-1981), Nelson Rockefeller (1908-1979), Laurence Spellman Rockefeller (1910-1966), and other concerned citizens, High Rock was officially dedicated as parkland in July 1965. In 1988, an additional 4.9 acres were acquired by Parks. There are varying accounts as to why this site, located between the Pouch Camp and the Moravian Cemetery at Rockland Avenue, was named High Rock. The most obvious and widely accepted explanation is that the land is high and rocky just beneath the topsoil.

Gretta Moulton died in 1971. In 1995, a gate to High Rock Park was erected to commemorate her contributions. This gate, designed by landscape architect Bradford Greene, depicts chipmunks, squirrels, turtles, and several plants native to Staten Island. A walking trail named for Moulton begins right inside the gate. The trail, marked in green, crosses a small creek and runs through forests and seasonal wetlands. Visitors can view a rare grove of persimmon (Diosyros virginiana), a tree normally native to more southern locales of the continent.

The Staten Island Institute for Arts and Sciences sponsored an environmental education program here from 1965 until 1989. At that point, the program was transferred to Parks. In 1971, the United States Department of the Interior declared High Rock Park a Natural Environmental Education Landmark. This property also lies within the 2,800 acres that comprise the Greenbelt, a collection of public and private properties on Staten Island established in 1984. The Greenbelt Conservancy sponsors several environmental educational programs and festivals throughout the year. Nestled within High Rock Park, a rustic stone house built in approximately 1921 houses the headquarters for the Greenbelt Conservancy.

In June 1996, Mayor Rudolph W. Giuliani funded construction of the $104,166 asphalt parking lot on Nevada Avenue. This helps accommodate the many visitors who come to High Rock Park, not just for the environmental programs and activities, but also to enjoy the quiet, scenic views and natural landscape.