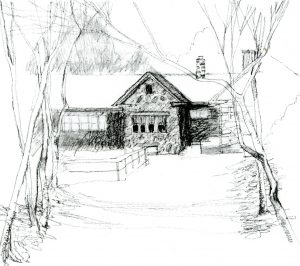 The Tonking House, built in 1921, now serves as Greenbelt headquarters. The See family lived in the house when they managed the Girl Scout Camp (1959-65). (Sketch by Marbury Brown)

In 1912, what we now know as High Rock Park, was comprised of several privately owned parcels of land. The Tonking family purchased 12 acres to establish a poultry business they called “Mayroyd Farm.” Other parts of Staten Island’s central highlands were owned by the Vanderbilt, Walker and Ebbit families.

In 1921, the Tonking family completed construction of a fieldstone house (presently the headquarters for Greenbelt staff) in the woods, along with “Tonking Road,” off Rockland Avenue.

In the 1930’s, the property and home were sold to the Ball family who had intended to raise horses on the site, but never actually did. The Boy Scouts of America acquired the land, and in 1951, sold 60 acres to the Girl Scouts for the sum of $35,000. The Girl Scouts established Camp High Rock.

From 1959 – 1965, the See family lived in the Stone House while they ran the Girl Scout Camp.  There were four See children who spent several years as residents of High Rock, enjoying the bucolic setting and unusual lifestyle just 20 miles from Manhattan. Mrs. See recently visited High Rock Park and shared some memories.

“We moved to Camp High Rock in 1959,” she recalled. “We had four children (two more came later), plus two dogs, two ducks, and one chicken named Henrietta. The camp was so beautiful and peaceful, [it was] a wonderful place to raise a family.

“I especially enjoyed being with the Girl Scouts when they came from the city for weeklong camping experiences,” Mrs. See continued. “They stayed in the Pouch, Roosevelt and Friedsman cottages, outbuildings on the High Rock property, as well as in a tent unit behind Stone House. In the winter months, they would also come for the weekend.

“Jerry, my oldest son, loved the surroundings very much, Mrs. See said. “He found complete joy at Silver Star Stables located on the back of the property on Manor Road, where he kept his horse, ‘Cloud.’

“When the camp wasn’t occupied with Scouts, Jerry would often ride around the grounds. One day he and a friend were riding through High Rock Park thinking no one was there when they quickly came upon a group of people and got startled. ‘The visitors were half scared to death,’ Jerry said.

“Later, he found out that the group, which included Mrs. Nelson Rockefeller and Mrs. Irving Berlin, was there for fund-raising purposes.

“All my children have been back to visit the park, most of them with their own children trailing behind. They were surprised to find the driveway not as long as they remembered. It seemed so vast to them as children, a world apart from the rest.”

Dorothy Reilly is director of public relations for the Greenbelt Conservancy. This article was originally published in 2005.