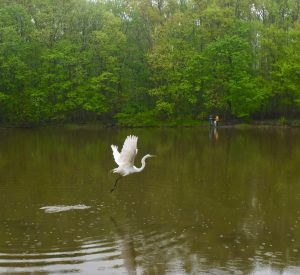 The below information is provided by the U.S. Department of Environmental Conservation

It would seem that providing food for ducks and geese would make them healthier. However, this is not the case. Waterfowl at artificial feeding sites are often found to suffer from poor nutrition. In natural settings, waterfowl seek and feed on a variety of nutritious foods such as aquatic plants, natural grains, and invertebrates. Many of the items commonly used to feed waterfowl (bread, corn, popcorn, etc.) are low in protein and are very poor substitutes for natural foods.

Natural foods are also widely scattered. Ducks and geese are able to find these foods and eat them in relative seclusion. At artificial feeding sites, competition for each scrap or kernel is high. Some ducks and geese (usually the youngest) are unable to compete for handouts.

Visible symptoms of poor nutrition and advanced stages of starvation are often seen at artificial feeding sites. For example, waterfowl may have drooping wings or may lose their ability to fly.

When ducks and geese feed on scattered corn or bread, they eat in the same place where they defecate. Not healthy. In addition, large concentrations of waterfowl would facilitate the spread of disease. Also not healthy. Diseases generally not transmissible in a wild setting find overcrowded and unsanitary conditions very favorable.

Most waterfowl die-offs in the past 10 years have involved artificial feeding:

Feeding attracts birds in unnatural numbers, beyond natural food and water supplies, and frequently in numbers beyond what people will tolerate. Over-grazed and badly-eroded lawns, golf courses, and school playing fields are often the result of overcrowding. Grassy areas such as ball fields and golf courses can become unsanitary and unusable. In Dutchess County, New York, recreational areas have been forced to close down until goose droppings could be cleaned up.

Feeding alters normal migration patterns of waterfowl by shortening or even eliminating them. Ducks, reluctant to leave in the winter, may not survive sudden cold. If the artificial feeding is stopped in time, ducks and geese can quickly adapt to finding natural foods and will follow their companions south. In West Haven, Connecticut, 30 swans died from starvation at an artificial feeding site during the harsh winter of 93-94. Meanwhile, over 800 swans survived nearby on natural food.

Artificial feeding often attracts birds to human habitats-parking lots, fast-food restaurants, and retention ponds-where they are more subject to accidental death. Natural cover, which can provide protection from bad weather and predators (even dogs and cats), is often lacking at these feeding sites.

Waterfowl can rapidly become conditioned to, and dependent on, handouts. Fed ducks and geese behave differently. They become more aggressive and eventually lose their wariness of humans. Some will not survive because they can’t compete. Many will lose the quality which endears them to most New Yorkers, their wildness.

At many feeding sites, domestic ducks have interbred with mallards, further compromising the wild population.

Excess nutrients in ponds caused by unnatural numbers of waterfowl droppings can result in water-quality problems such as summer algal blooms. And where waterfowl congregate to feed, E-coli counts can swell to levels that make the water unsuitable for swimming.

Many damage-avoidance techniques such as chemical repellents, fencing, or noise makers are costly and may even be useless once animals lose their fear of humans. At times, it is necessary to destroy nuisance waterfowl because of the damage they cause.

From treasure to nuisance … wildlife managers recognize that the public’s perception of the value of wildlife is often reduced when numbers swell. When any wildlife population exceeds the number that can be naturally supported by available habitat, this can polarize the public and exaggerate conflicts between landowners who suffer damage and those who visit the site to feed the geese and ducks.

It may be hard to imagine that a handful of bread or a stray french fry could contribute to such a growing problem. Compound that, though. In most cases where artificial feeding occurs, one well-intentioned feeder leaves and another soon arrives.

Yes, New Yorkers love waterfowl and care about their well-being! Please consider the effects of feeding waterfowl, and do what’s right.

Each person that cares enough to become educated about the effects of artificial feeding can make a difference. This problem requires cooperation from everyone, but the solution starts with each individual. One person may choose to discontinue feeding. Another person may decide to put up a laminated sign (PDF, 34 KB) to discourage others from feeding.

If everyone stops feeding waterfowl, the waterfowl won’t disappear. Families can still visit sites to enjoy viewing ducks and geese. A child can still be encouraged to learn more about waterfowl and their natural habits. And some zoos offer feeding of captive waterfowl.

Clearly, you do not need to feed waterfowl in order to enjoy them. In fact, it should be apparent now that the best thing you can do for the overall benefit of waterfowl is to stop artificial feeding.

Kindly click on this link to learn more about the hazards of feeding waterfowl.