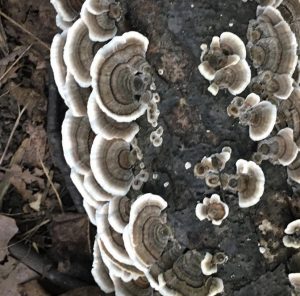 Fall is a time of transition.   While colorful changing leaves and cooler temperatures are the most noticeable characteristics of the season, the forest floor also showcases a more subtle sign of seasonal change.

There is a diverse array of fungi throughout the forest that tend to peak in mid to late September. Look closely at the logs, tree trunks, and sides of the trail – what do you notice?  Perhaps you see something that looks like a turkey tail or a toadstool.   There is an incredible amount of diversity among forest fungi.  From the bright orange chicken of the woods to the pale, subdued parchment and crust fungi.

If you are interested in identifying the fungi you find, take photos and upload them to the iNaturalist app, which will help identify your finds and create useful data that aids scientists and resource managers in understanding when and where flora and fauna are found.  You may also wish to consult a field guide, such as the National Audubon Society Field Guide to Mushrooms, to help you figure out which mycological treasures you found. 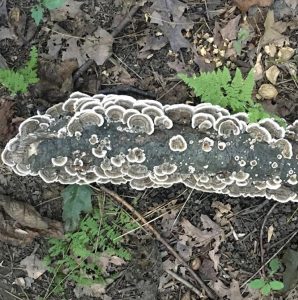 While there may be considerable diversity in the appearance of the fungi you find in the Greenbelt, they all have the same function in the forest ecosystem.   Fungi play the role of decomposers — they break down dead organic matter and return vital nutrients to the soil, allowing nutrients to cycle through an ecosystem, which is vital to the food chain. Speaking of food chain, deer, chipmunks, squirrels, mice, moles, slugs, flies, and other animals feast on forest fungi, and in turn, help disperse spores for more fungi to grow. The forest provides the food that its flora and fauna need to survive, but not for us to eat.   Foraging is not permitted in NYC Parks.  We should leave nothing but footprints and take nothing but photographs.