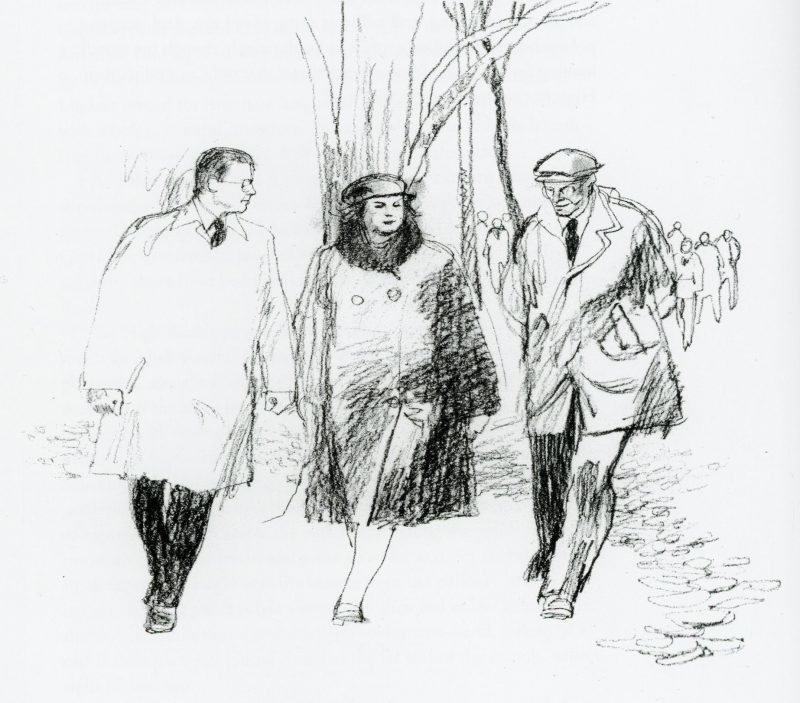 Gretta Moulton leads a winter hike at Camp High Rock in the early 1960s. The man at left is Judge Holt Meyer, a key figure in the effort to save the wooded hilltop from commercial development. (Sketch by Marbury Brown)

The chaotic Rolodex in my mind rifled through the faces of friends from days long past, friends who hiked to save this glorious Greenbelt in the 1960’s. An image was fixed: that of Jean Roland serving pea soup at the end of a hike – Jean with Barbara Lamberton, and their husbands, Budd and Jim, who were nearby testing the sherry.

Overseeing all events and strategies were Gretta Moulton and John G. Mitchell, our leaders and inspiration.

They were a formidable bunch, passionate about the landscape and successful in forming collaborations with national environmental organizations, local political leaders, and noble parks commissioners.

Through this cooperation among responsible citizens and public servants, the Greenbelt exists and is as fine a legacy as one could wish.

Elizabeth Seder was the first president of the Greenbelt Conservancy.